Last week I was reading this post over at Clutch Magazine about Charlize Theron dressing her son up in a blonde wig and hat. I clicked on the picture and looked closely and realized that he was in fact dressed up as Elsa from the movie, Frozen. Not just a random blonde wig. He had on the dress and shoes and black folks were all up in arms.

Why? Charlize Theron is the mother to a five year old son. Yes, he’s black. Yes she adopted him, but she’s still his mother. Now that we have that settled let’s get something straight…parents can do whatever the hell they wish when raising their children. As long as it doesn’t hurt them in any form or fashion.

I’ve written about this before. It is a parent’s right to raise our children however we choose. Ultimately we all want the same thing… to raise happy and healthy children that become productive citizens and not mass murders. That being said, Charlize is no different. The problem with the comments in this post were noticeable. People were making it into a race issue. It wasn’t. It was a parenting choice.

They were attacking how she chose to parent her son and trying to paint it is a racial issue saying she is prohibiting him from knowing how much of a strong black boy he is by allowing him to dress as Elsa. What? I in no way thought that he was going to be damaged by dressing as Elsa. I felt it was her parenting choice. However, I felt the commentators were disguising their disgust and trying to mask it in race when it is in fact a homophobic issue for them.

They were mad that she allowed her son to dress up as a girl. If it was from Disney’s Princess and the Frog and it was Princess Tiana (a black princess) would that have made it better? Nope. It wouldn’t. But, it wasn’t a race issue and I felt compelled to say that it was a parenting choice. Why? Because I’m a glutton for punishment? Nope, because I know what it’s like to parent.

The conversation took an ugly turn when I tried to defend her. Why? I’m defending her right to parent and to parent a black boy in the best way possible. Who are we to judge? That made me the apparent target of being judged. 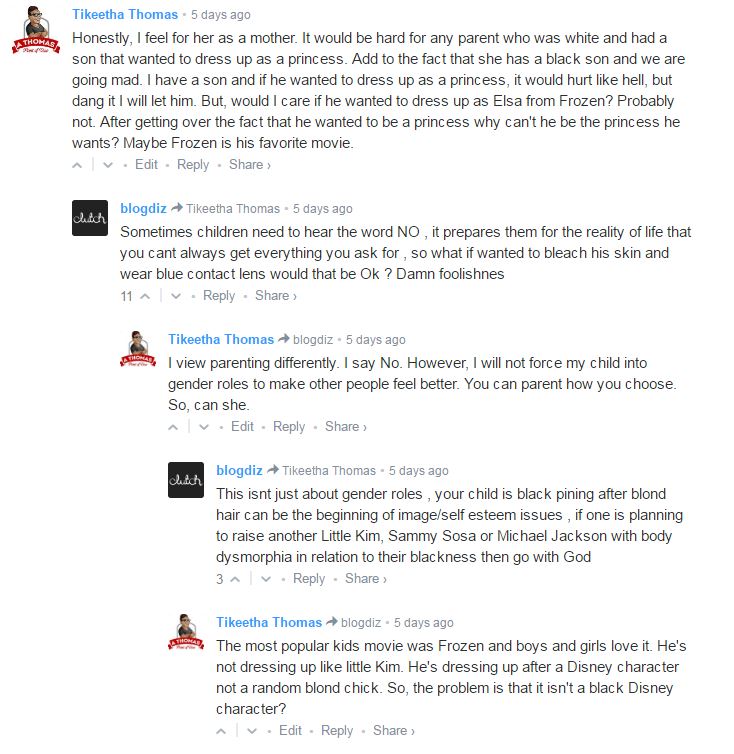 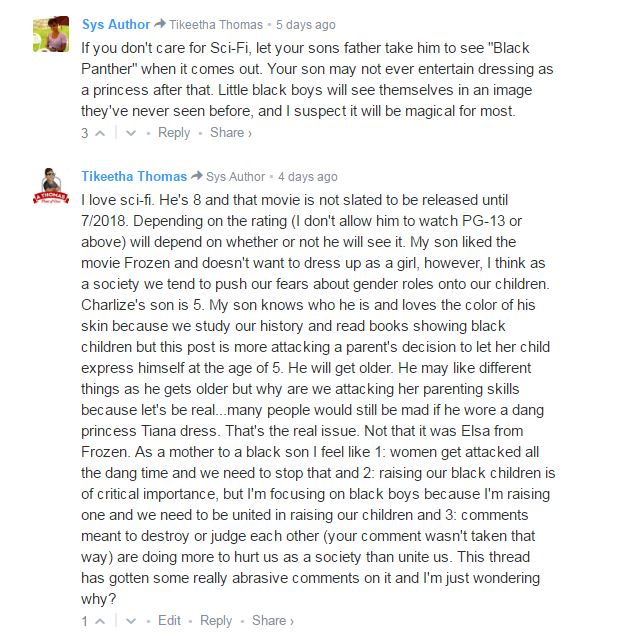 Now, I stopped responding to the foolishness of others, but the woman Sys Author had some pretty respectful comments so I continued to engage. I don’t engage with idiots, but she was polite and respectful and we could agree to disagree. 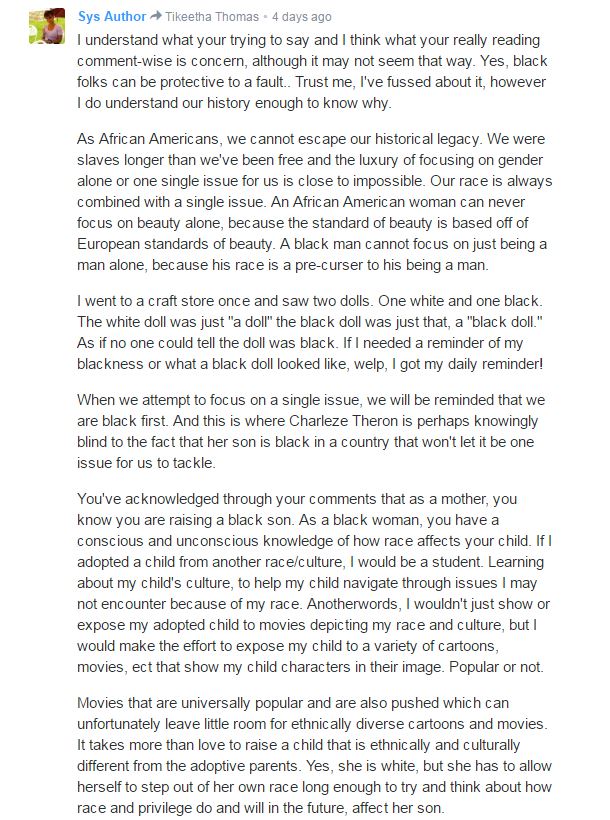 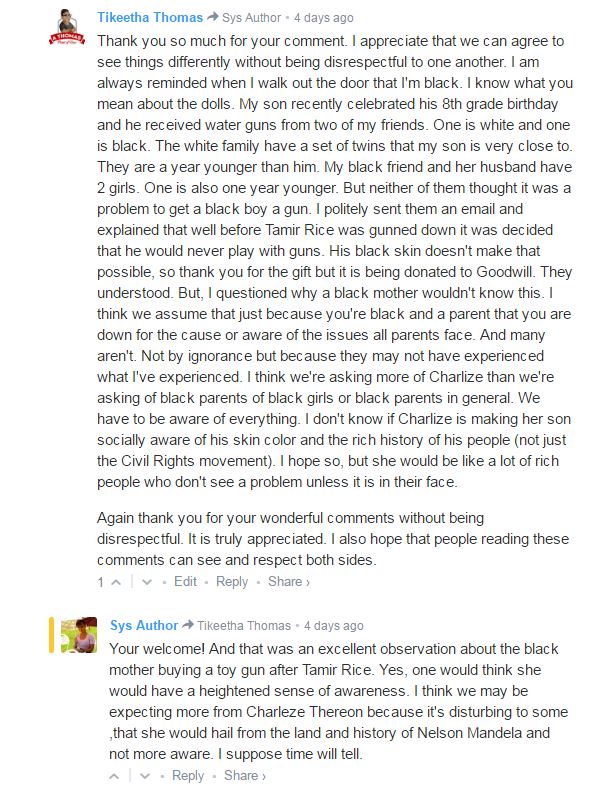 While I appreciated the interaction of intellectual conversation, I just find that the whole thing has grown out of proportion. Rich people have a different set of issues that an average middle class or poor person may not understand. Each level of the tax bracket could probably say the same… You don’t know what it’s like to walk in my shoes. Do we?

I don’t think so. I am thankful for my varied experiences. I grew up poor. I would be described as middle class (working poor in my opinion) but I may never obtain millionaire status without hitting the lottery. I’m okay with it, but unless things take a turn for the worse, my son will never know what it’s like to be poor.

But, I say all this to say that parenting in general is hard. Parenting black boys is hard. Parenting black girls brings another set of issues too. Parenting black children in today’s society where you have to wonder whether or not sending your children to school will allow them to come home safely or whether walking them down the street will get you killed by a stray bullet is a hard reality for many black Americans. But, we can’t allow bitterness to make us judgmental and make everything about race.

In this case it was a parent’s decision to allow her child to dress up like Elsa. You don’t agree? Fine. It’s not up to you to agree with it or not. However, it doesn’t make her a bad parent or someone who lacks racial sensitivity.

We can’t judge a parenting choice and disguise it as a racial issue. There are enough racial inequalities that are real. Those are the battles that are worth fighting. I respect her decision to allow her son to do what he wants. To wear what he wants. To allow him to freely express himself.

We just have to stop judging each other. We have to stand united and understand that we all make mistakes, but respect our differences. We all want the same thing for our children and we all want a better country. I  believe that someday we’ll get there.