I had drinks with my girlfriends earlier this month and we were talking about our experiences with men. One of my girlfriends said, “I don’t want you to settle.” I replied, “We all settle.” She disagreed. She said no you shouldn’t settle. You should compromise. I responded that you settle in your relationships and in your marriage. Everyone settles.

Let me tell you why I think we all settle. Dictionary.com defines to settle as a:

to decide, arrange, or agree (often followed by on or upon):

to settle on a plan of action.

That being said, I believe that we all settle in some form or fashion in our relationship. No one is perfect. You decide that you are willing to settle (accept) things about your partner in order to let your relationship grow. You get where I’m going with this? Think about this…

See what I’m saying? Everyone settles because no one is perfect and you are willing to settle in order to be in a relationship with someone you think that you are compatible with. I get that you don’t like the term settle, but it isn’t compromise. Compromise operates under the premise that we both lose.

a settlement of differences by mutual concessions; an agreement reached by adjustment of conflicting or opposing claims, principles,etc., by reciprocal modification of demands.

In a compromise, we settle our differences by mutual concessions. We both lose. Let me give you an example:

In both scenarios, the underlining fact is that a conclusion is made. You can’t compromise on children. Either you will settle and accept the fact that the person you like has children or you will move on.

I know we may not like the term “settle” because of the negative connotations it conjures in our minds, but I don’t look at it like that. I’m not asking you to settle for a drug user and you’re not. I’m asking you to decide what things about a person are worth settling for.

Look at it like this…what you want, what you hope to get and what you actually may end up with may vary and you have to decide if you want to settle for the person you are presented with. If yes, great, but if not, no worries, keep looking. 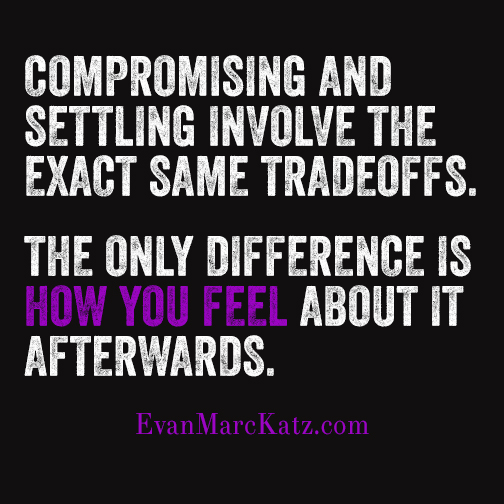 Until next time loves!