As a black woman, I have to tell you that each time a black person hears a white person say, “I have black friends” there is a collective sigh that tells us that you’re lying and you’re probably a racist. It’s not an accurate statement, but understand that it makes us think that you probably count your colored friends if you can name how many you have. Black people don’t count our friends, but after reading the article in the Washington Post, entitled “Three Quarters of Whites Don’t Have Any Non-White Friends”, I wondered if it really matter and if I had any non-black friends? Do I count them? Am I just like the folks surveyed in this article?

Who knew that when Chris Rock joked in his HBO stand-up that blacks have many white friends, but whites have only one black friend that I could be moving into that circle. But, I have to ask the question…does it matter? Friendships take time to develop and some people are friends for different reasons and experiences. Being a woman we tend to gravitate and bond with like minded women, but does that make that person a friend or an associate? Your neighborhood, environment and experiences can affect your interactions with other people and your ability to develop and define friendships with people of other races.

When I was growing up on a military base in Texas, I was exposed to all different races. However, most of the family on base knew each other. My best friends were white in color but two different nationalities. Sheila was from Tennessee and Kristin’s family was from Mexico. We were called the Three Musketeers by our parents because you would always find us together. Where I went, they went and vice versa. My closest friends lived in my neighborhood and I had a crush on the white boy who lived next door named Charlie. I knew some other black kids who lived on base and we bonded at school, but the military sort of shaped my view on the world. I realized one thing being on an Air Force base in Abilene, Texas…all they cared about was color: blue and your rank. Not race. It wasn’t until I moved away from that base that I realized that the world didn’t operate with a singular track mind. It focused on all things including the color of my skin.

Moving to Maryland was the beginning of that realization. When I came out of the first day of school looking for my school bus among hundreds of others (bear with me, I was 13) and couldn’t find it I began to cry as the buses started pulling out of the school. The bus left me and the principal was kind enough to take me home. I cried all the way and when my mom asked me how was the first day of school? I replied, “I hated it. There were so many black people and they were mean to me.” She gently replied, “Baby, you know you’re black too, right?” I did, but that didn’t mean that I liked the black people I was around. You know the ones that laughed and pointed at me when I wore my Levi’s and cowboy boots (Hey, I was a Texan).

When we moved to the northern part of the county, I was able to develop friendships with other non-black people. I was in advanced classes and student government so it made finding like minds a little simpler. I took Modern Dance and loved history. I was different, but in high school, I was able to find a place in the High School puzzle. I just fit. I had friends from all different races and so did they.

My friend chart looks like this, but does it matter? 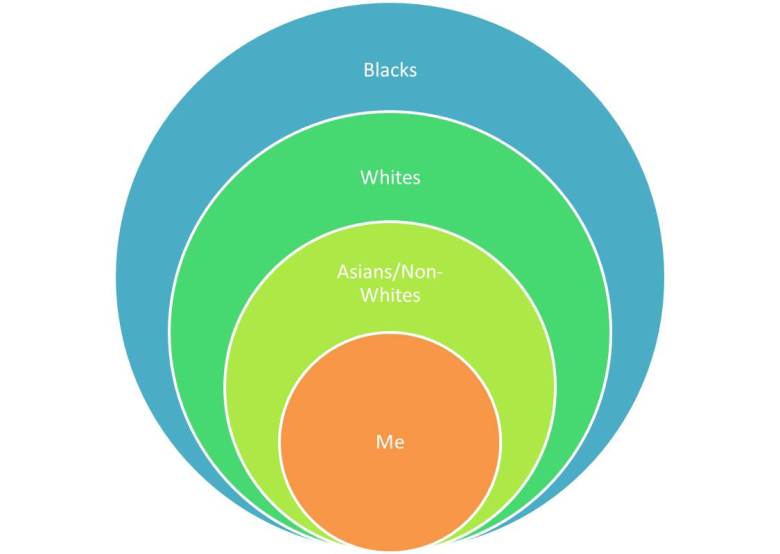 Friendships are fluid. They take time to develop and with social media and getting older, we sometimes lose contact with one another. But, the thing about friends is that you can pick up where you left off without missing a beat, knowing it will be okay. You just go with the flow. We change jobs, addresses, sometimes spouses but the bonds that brought us together as an adult make it easier to stay in touch. Random emails or likes on Instagram or Facebook allow you to know who is in my circle. Some have been there since middle school and others when I moved back to Maryland, but I am thankful and blessed for each relationship and I suggest we spend more time cultivating them instead of trying to make a case of pointing out that skin color separates us. 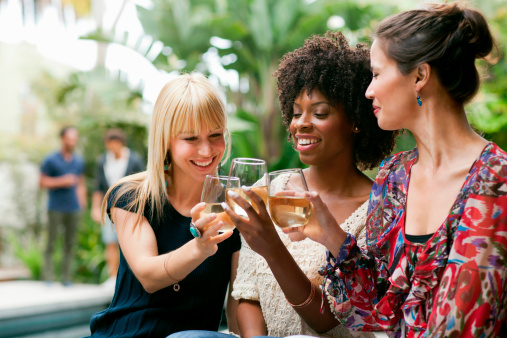