I’ve never really liked the circus. I can’t explain why? Maybe it was the smell. Yep, that’s it. It was the smell. I hate the smell of the animals. Oh, I love the announcer and the acrobatics and the toys that are extravagantly priced, but I think what I hate most are the clowns. Why? They’re kind of freaky and scary.

It must have been when I saw Stephen King’s “It” that I started to hate clowns.

I disliked the make-up they wore,the over-sized shoes and weird costumes. They were freaks multiplied. Don’t forget that red nose that seemed to scream, “Stop! I’m Dangerous”. Yep, it was probably this movie that ruined my love for clowns.

But, I grew up and discovered that my dating life sort of reflected that of a circus. What I mean is that I’ve met and dated men who I just realized were the epitome of what I hate…clowns. Did I realize that I was going to the circus, buying popcorn and enjoying the comfort of the thing I disliked most? Clowns?

Nope. Not until recently. Let me tell you what happened. I had a date planned with this gentleman for a Saturday evening. Let’s call him Mr. X. Well, Mr. X and I had spoken on the phone around noon the day before and I hadn’t heard from him in over 24 hours. I was wondering did he want to cancel or would he be a no-show and say he fell asleep or that something came up. I needed to confirm our plans. Why? Because I’m anal and like confirmation the day of for any plans. So, I call him about 6 hours prior to our date and ask, “Are we still on for dinner tonight?”. His reply, “Of course. I’m looking forward to seeing you.”

I smiled and got off the phone. I looked extra cute because first date impressions are a must. Mr. X and I had a ball. Great conversation. Great company, food and drinks. During dinner he said, “I can’t believe that you thought I wasn’t going to show up for dinner.” I responded, “Well, we hadn’t talked and I just wanted to confirm. Something could have came up.” He responded, “I didn’t need to confirm. I asked you out. You said yes. We agreed on a spot, so I didn’t think I needed to call you. I would never have cancelled.” I smiled and said, “Life happens”.

He looked at me with sincerity in his eyes and said, “I need to get you away from the circus.” I looked at him confused. He said, “You seem to be dating too many clowns. There was no way I would cancel or be a no show when I asked  you out.” There it was…

He knew what he wanted and he was going after it. The night continued and we parted ways promising to talk tomorrow and I drove home thinking about what he said and realized he was right. I had been dating clowns. Not the scary clowns from Stephen King’s “It” but the kiddie clowns: 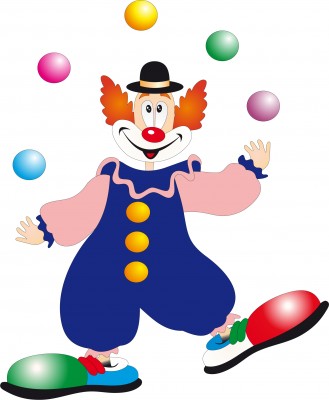 These clowns are worse because I run from the scary clowns, but these kind of clowns are cute and make you smile. They remind you to not take life too seriously and enjoy the flow. You think well, they seem like fun. You fall for the “Let’s hang out and get to know each other clown” Then you realize that they are just jokers in disguise? How?

Because you realize that they are incredible jugglers and you have become one of the balls that they want to juggle. They dance around serious topics. Fall off in the communication. Tell you that they want to get together and have excuses for standing you up and not being available. That’s why I thought Mr. X was going to cancel because I was used to dating clowns.

Aha! I am my own worst enemy. I needed to take a step back and reevaluate the relationships that I had with men and weed out the undesirables. Figure out who the clowns were and get my butt out of the dang circus. Close out the rotation. I own my decisions. No one’s fault but my own, but let me tell you this… I will date no more clowns!