I’ve missed each and every one of you immensely. I took a break and haven’t posted but I needed it. I’m getting back into the swing of things and I owe you some things, mainly parts  2 and 3 of my video interview, the conclusion to my story and my updates. Where to begin?

Munch ended his 5th grade year. He’s going to middle school. The same school. He ended it with a 3.5 cumulative GPA. He asked what was the maximum. I explained 4.0 and I told him that was good considering that he’s in a French Immersion program. He relaxed a little. Graduation was too cute and I can’t believe how fast it is all going by. 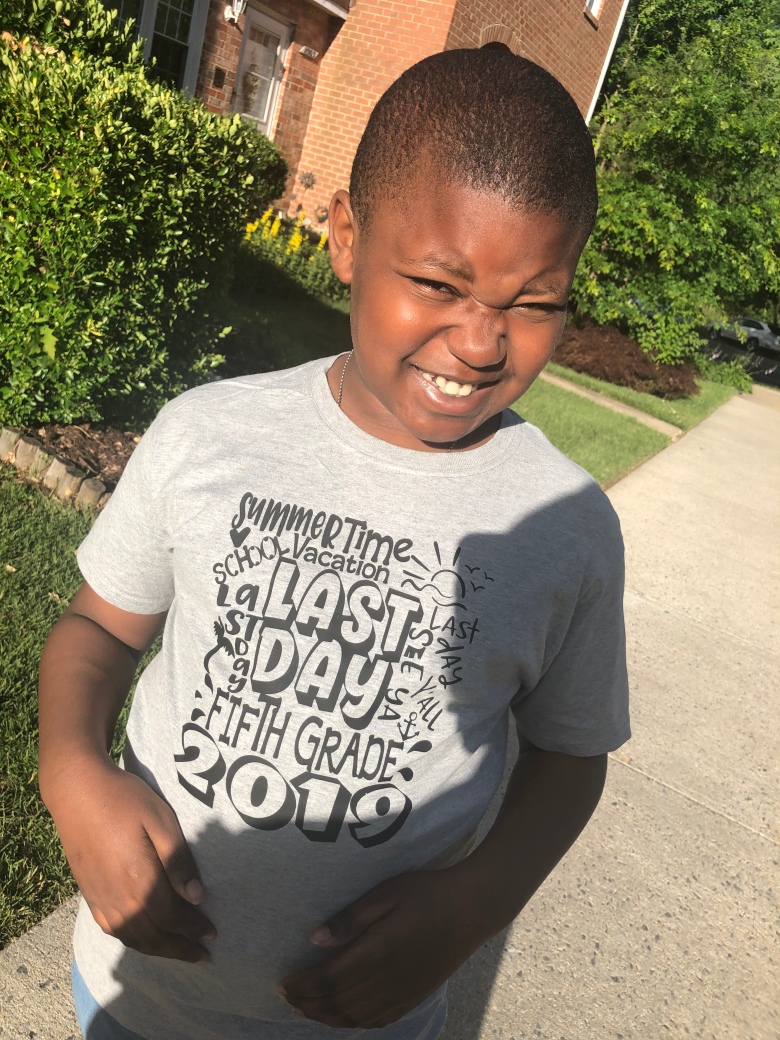 He’s in summer camp and having a blast. He went to a huge amusement park with the youth group at church last Saturday. I was freaked out because of the weather, but I talked to the leaders and knew that they had my son. He would be good with them. I only have one so I tend to be overly protective of him. This heat wave on the east coast is no joke. With the heat index it was feeling like 115 degrees. That’s way too hot to be outside but I let him decide. He wanted to go and he had fun. The group stayed hydrated by taking 30 minute water breaks. He’s growing up and is now part of the group of bigger kids.

I had so much going on in June that I decided to take a social media break. This was something that I had never done with FaceBook and Instagram, but I deleted the app off my phone and disconnected. I needed to reframe my mind and spirit to get on one accord. It was weird when I first did it but I have to tell you that I’ve been so blessed. I’m praying more. I’m reading more, writing more and just trying to be in the moment. I am still off social media and am anticipating going back some time next month. Can I tell you how good it feels to be just existing?

I’ve been working on some things with my sorority and personally. I’m doing a book signing in October with KE Garland and some of the other contributing author’s of Daddy: Reflections of Father-Daughter Relationships. You will hear more about that in the coming weeks. I’m super excited and it truly has been the motivation that I needed to get serious about my writing. I hope that if you live locally you will come out and support us.

Ugh! Ya’ll know that I hate it right? It truly sucks. I talked about it here in my post: I Need a Hobby Besides Dating . Long story short. I met a great guy that I thought had all the things that I desired: mental stability, emotional stability, financial stability and great communication skills. Hell, I would settle for good communication skills. He rose through the ranks and took my eyes off the prize and decided that he wanted us to date exclusively. No more random dates with other men. He wanted us to be exclusive and I was like okay.

Now, here’s the thing. He was doing a lot when it comes to dating. Driving 1.5 hours a night after working all day to pick me up and take me out to dinner and a movie and then driving an hour back. That’s a lot of miles. He was sincere. But, it wasn’t him. I realized two weeks in the exclusive relationship that there were things that were not sitting well with me. Basically it was his lack of communication. He sucked at it. You can’t live that far and have communication issues or the relationship will fail. It did. I tried to give him the opportunity to get it together but it only got worse. I ended it. I explained that although he was a great guy he doesn’t have time and I need more than what he’s willing to give.

I took the relationship off the table and tried to just be his friend and continue to get to know him because we had fun together. He f*cked that up. He stopped talking to me without my knowledge and basically ghosted me for about a week. I woke up on Monday with a text with one word “Sorry”. I was genuinely hurt. I thought he was dead. Nope, he was alive. I prayed for him with sincerity and moved the hell on. I want more and I truly believe that I’m in my breakthrough season. I don’t hate him. I just love me more and I don’t deserve that BS. I said he had a lot going on. He proved it. Relationships are not his priority.

That’s about it. All the things that have been happening with me. I’m getting it together and I thank you for still finding it in your heart to read and follow this blog. You’re amazing and I’m thankful for each and every one of you.

Want to keep in touch? You can find me on social media at the following links: Twitter @mskeeinmd, Facebook page A Thomas Point of View and my Instagram page @mskeeinmd.